Explore the land of thousand hills with Go self-drive tours, the Gorilla Trekking which is the best for your visiting Rwanda depends enormously on you – what you want to see, how you like to travel and what kind of experiences you want.

Over the years, we have established a reputation of simply being your choice for Vacation in Rwanda. We are offering self-driving car rentals in Rwanda, and our expert Driver guides are ready to take you on a journey throughout the beautiful land of thousand of hills. We are flexible enough to incorporate last-minute changes.

Go self-drive are tailor-made safari packages to suit travellers of all types and age groups as we pay attention to time, safety, and budget constraints. If you’re looking for a long-term vacation we got affordable combined package rates suiting every traveller for an East African Safari. We offer Gorilla Trekking Expeditions, wildlife tours, mountain biking, and cultural and Nature safaris. With more and more Eco and budget-conscious, we provide you with downsized cars, vans, and buses to move larger items during your vacation when needed. Whether you’re a full family, or a couple who needs camping on a trip we will provide you with friendly rates to suit your needs

This mountain Bisoke adventure is one of the most memorable activities in Rwanda, the top of this volcano has a spectacular crater lake. It’s also simply a 6 – hours hike including the 2 hours descending down to the starting point. Experienced hikers can get to the top of this mountain in a matter of 3 hours or even less and return to the base in about an hour.

On the day of hiking, the hikers converge at the park headquarters at Kinigi at exactly 7:00 am to attend to a briefing and be assigned a park ranger. The park rangers are usually natives of the Volcanoes national park vicinity and thus very knowledgeable about the mountain adventures. At 8:00am the adventure begins. Your tour guide will transfer you to the starting point. You will be assigned porters to carry your baggage. You will be provided the hiking gear.

Trekking to the Dian Fossey Tomb is also one of the most sought-after safari activities carried out while visiting volcanoes national park for a gorilla trip. This trek takes 30 minutes from the park headquarters to the trailhead to access the Karisoke research camp where visitors walk for 10 minutes to the park boundary. 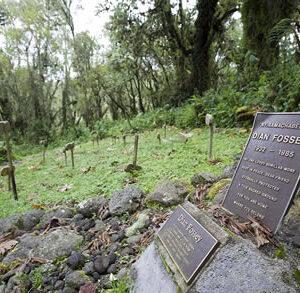 This walk from the park boundary to the research centre where the grave is takes about an hour and a half and affords good views of the forest hogs, forest elephants, a variety of primates and bird species. This hike is an incredible experience physically, emotionally and intellectually. It is so inspiring to learn about someone who was so dedicated and left a legacy that exists even today. The hike involves moving through the forests and hiking up the slopes and therefore requires some relative degree of fitness and patience. At the site, you will find the house from where Dian Fossey was mysteriously murdered in 1985 but the more peaceful is the place where she was buried just next to her favourite gorilla friend, Digit and about 20 other mountain gorillas either killed by poachers or suffered death for other reasons.

These golden monkeys live in the bamboo vegetation towards the base of the volcanoes and habituation has helped them to overcome their initial shyness in order to accept their daily visit by researchers as well as tourists. Trekking golden monkeys and gorillas is a similar experience – in a small group of no more than eight people, and you can spend one hour with the monkeys once you find them.

These are very active creatures, and jump from tree to tree which is really interesting and a little difficult to Photograph! The golden monkey trek is worth going for a while in the volcanoes national park and if you are interested in wildlife, this a rare and delightful experience not to be missed!

Rising at an elevation of about 4507m above the sea level is Mt Karisimbi, which is the highest of the eight major volcanoes of the Virunga field and the 5th highest in Africa. It also strides along the border between the Democratic Republic of Congo and Rwanda on the western branch of the Eat African Rift valley. Karisimbi lavas have been dated from 0.24 Ma to 0.010 Ma indicating that the volcano is very young.

This name Karisimbi is also derived from the word “Amasimbi” which is in Kinyarwanda and means “white shell”, referring to the white-capped summit which is often seen on top of this volcano. It is flanked by Mikeno to the north, Bisoke to the east and Nyiragongo to the west, on the other side of the Rift Valley. The mountain is also situated in Volcanoes national park and is popularly known for the mountain gorillas

Hiking this Mountain is strenuous yet very rewarding, it takes two days and the climb starts early in the morning taking 6 hours and involves navigating through the Bisoke side before reaching the first stopping place at an altitude of over 3,700 meters for overnight camping before finishing off the journey the next day. 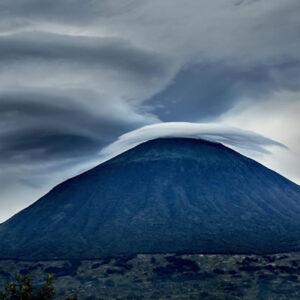 This hike to the Karisimbi‘s summit is not an ordinary one but also affords sights of several bird species, and primates like monkeys and gorillas since the volcanoes lie in the primate park. It is also known for its exotic plants in its four belts of vegetation, from the dense forest at its base to the barren volcanic core at the summit. The hike up the summit is characterized by muddy trails especially during the rainy season, though due to the altitude, it can rain at any time of the day.

In addition, you need relatively good health and great stamina to hike through the slippery slopes to reach the summit which is white-capped as a result of the hail and the sleet which accumulate in the higher elevations from its frequent storms. This implies that one may have to incur an extra cost of hiring a porter ($20 per day) to help in carrying your luggage and hiking equipment. This hike is also close to the Karisoke Research Centre where the grave of Dian Fossey, the American conservationist who cared for the mountain gorillas, this also means that one has a chance to visit the grave as well as trek the golden monkeys in addition to the Mountain gorillas.

mountain_gorilla_trekking_in rwandaMountain gorilla tracking remains the most popular in the park, with over a total of 40 permits issued daily, eight for each of the five habituated troops. But Volcanoes National Park is not only for gorilla tracking but other activities like trekking, hiking which are now well organized, from a two-day ascent of Karisimbi to a non-strenuous nature walk to a cluster of crater later, but the most exciting achievement is that visitors can now visit habituated troop of the near-endemic golden monkey.

Newspaper is your news, entertainment, music & fashion website. We provide you with the latest news and videos straight from the entertainment industry.
Contact us: goselfdriverwanda@gmail.com

Best Island Escapes You Can Drive To

5 Must-See Beaches of the World